Eight O’Clock original ground coffee is a delicious blend of premium 100% Arabica coffee beans at a medium roast. Outstandingly smooth, yet full-bodied with a complex finish. It may be “original” but it is certainly not boring. The coffee is ground and bagged when it is still warm from the roasting and the one-way freshness valve keeps the flavor locked in. This is sold in pack of four 12-ounce bags. Eight O’ClockAbout Eight O’Clock Eight O’Clock started as a store brand way back in 1859 when the Great Atlantic & Pacific Company opened its doors and the whole bean coffee that would later become Eight O’Clock was among its signature products. By the 1930s Eight O’Clock reigned supreme as the #1 coffee brand in the US. During this time, one out of every four cups of coffee consumed was Eight O’Clock. Today this remains as America’s best-selling whole bean coffee and is the fourth largest national coffee brand in terms of volume. Every time you brew a pot of Eight O’Clock coffee, you expect it to be great. And, you are not disappointed–because they put a century and a half of expertise into every bag. 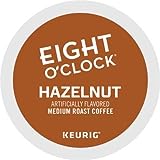